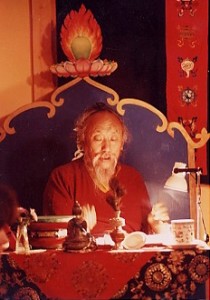 His Emininence Chagdud Tulku Rinpoche, a highly realized meditation master, artist, and Tibetan physician, was born in Eastern Tibet in 1930. Abbot of the 12th century Chagdud Gonpa monastery, Rinpoche received extensive instructions in all aspects of Tibetan Buddhism, completed two three-year retreats, and studied with some of the greatest Vajrayana masters of his time. He fled Tibet at the time of the Chinese Communist occupation in 1959 and helped to establish and administer several refugee camps in both India and Nepal.

Chagdud Rinpoche entered parinirvana on 17 November 2002 while in residence at his center in Brazil. 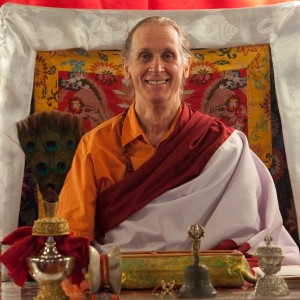 Lama Padma Yontan Gyatso (Richard Baldwin) began his formal Buddhist training in India in 1970 with the outstanding meditation master, the late Venerable Kalu Rinpoche. Returning to the U.S., he entered the Buddhist Studies Program at the University of Washington.  At this time he also received many teachings at the feet of the late Venerable Dezhung Rinpoche, a master of all lineages. He received his degree in 1974 and subsequently embarked on a number of meditation retreats. In 1982 he became a student of H.E. Chagdud Tulku Rinpoche.  In 1996, Chagdud Rinpoche ordained him as a lama and appointed him as the teacher at Chagdud Gonpa Amrita, Seattle.

Lama Padma teaches and practices with meditation and study groups throughout the Northwest, including several Buddhist groups in state prisons.

Having translated from Tibetan the extensive Tromge Chenrezig text, in 2004 Lama Padma deepened his connection with the Chenrezig practice when he traveled to Tibet and met with the terton Tromge Dechhen Kyabje Wangpo, who acknowledged him as a lineage-holder of the practice. After completing extensive retreats over several years as directed by Tromge Dechhen Rinpoche, Lama Padma was authorized to offer the empowerment for the Tromge Chenrezig.

Additionally, Lama Padma is coordinating the development of Chokdrup Ling, a 320 acre retreat center in the Four Corners area of Southwest Colorado.